The Death of Satire 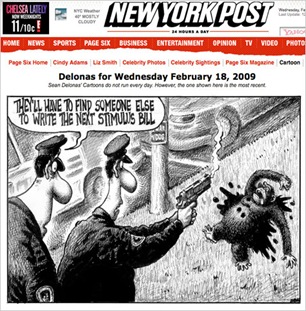 There’s a small chance you’ve seen or read about the comic on the left.  It appeared in the New York Post about a week and a half ago.  It was an editorial cartoon.  Editorial means that it’s trying to make a point.  This comic has stirred a bunch of controversy and protests since it was published (and probably increased the Post’s readership a little) because people are considering the monkey in the comic to be our newly elected president Barak Obama and the comic as a result is consider “racist”.  However, anyone who knows how politics and bills work, would no that the monkey in no way represents Obama and is there not racist.  Of course I seem to be in a very small minority in this country in that I can actually look at something and see the satire in it and understand it for what it is.  The monkey does not represent Obama it is instead suppose to represent those in the Senate who wrote the economic stimulus bill that Obama just recently signed into law.  I need everyone to understand something and understand it very well,

The president does not write the bills that are voted on and signed, they are written by senators and representatives elected by us, the citizens.

The monkey is suppose to represent one of the thousand monkeys in a room with typewriters that will eventually write Shakespeare.  The idea is that if you get enough simple minded people in a room (ie, elected officials), they could eventually write a decent stimulus bill.  With the death of this particular monkey, someone else is going to have to write it.

Hopefully we can all agree that the comic is not about Obama at all.  Can we move on now?  I hope so.

With that out of the way, lets move on to what I really want to get at here.  This is satire people.  Have we in America become so politically correct and tolerant that we look at anything and find offense to it?  You can’t read a newspaper, watch the news, or listen to the radio without hearing about how someone is suing somebody else, or demanding an apology, or is shocked about something they saw or read.  We, as a community, have lost our sense of humor, and to some larger degree we have lost our intelligence.  Seriously, we can’t even use satire anymore because the large majority of the population is too stupid to understand it.  You can’t make people think anymore.  Instead, they want to be told how and what to think.  People rely on biased news sources like CNN or Fox News to tell them what’s going on in the world.

We as a society need to get over ourselves.  Not everything has a hidden meaning, a message, or a purpose.  And the things that do might actually require you to think for yourself, not be told how and what to think.  We have become so politically correct that half the time you can’t even say something you really feel because it might offend someone.  The first amendment of the United States Constitution is the “Free of speech” and it is listed first for a reason.  We are suppose to speak our minds, we are suppose to question our leaders (yes even Obama).  We are suppose to point out things we see as flaws so that they can be examined and fixed.  Satire has been used for centuries for this.  Jonathan Swift wrote “A Modest Proposal” in which he talks about cooking children to feed the hungry during a famine in his native land.  He wasn’t seriously saying “lets cook the kids” but it made people wake up and go “hey, we have a serious problem here”  and got people to begin work on rectifying the problem.

Satire is a tool, a weapon, and a method that often goes to extremes to get a point across.  The current economic stimulus had serious flaws in it (a lot of economists thought so at least) and thus was the subject of this satirical cartoon.  But because we now have a black president (not trying to be racist here), the image a monkey and the mention of the stimulus immediately had people screaming “racism” without taking a moment to think about it.

We have entered (some would say long ago) the era where common sense is dead, looks like we can add satire to the list.  I challenge you to really take a look at yourself and think about why you think what you think and say what you say.  Do you do it because that’s what the guy on CNN says or the writer for the Huffington Post wrote an article about it?  Do you read websites that don’t share your point of view so that you can see a different side of the issue?  Are you essentially a mouth piece for your side of the political spectrum?  Who are you and what you believe?

This entry was posted in Commentary and tagged Commentary, Politics, racism, satire. Bookmark the permalink.

5 Responses to The Death of Satire