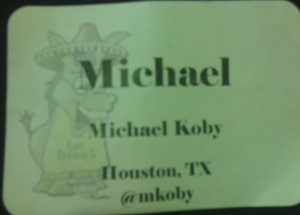 Over the weekend I made a trip to Austin to attend the Los Techies‘ Open Spaces event entitled Pablo’s Fiesta.  This was an Open Spaces Conference where the focus was on software craftsmanship.  There were a lot of good sessions and I managed to be introduced to several new ideas, technologies, and even a new programming language.  While I’m still letting a lot of what I saw, heard, and read while there sink in, you can expect some blog posts in the (near) future about some of the things that were brought up and demonstrated.

This was my first Open Spaces conference (I missed the one held in Houston last year due to the recent birth of my son), and I have to say I quite enjoyed the format.  There didn’t seem to be quite as many breakout sessions at this one as I’ve heard Open Spaces can be known for, but maybe they happened and I missed them.  The people doing the talks did a great job and the open atmosphere was great.  I was in one session where the speaker had someone take over his laptop to give a demonstration on some areas of the topic he wasn’t too familiar with and it was great.

A wiki was set up for the conference, and people were uploading session notes, links, and even recordings of some of the sessions, so check out that wiki at http://pablosfiesta.pbworks.com/

Having attended this conference, I’m now even more excited about the Open Spaces that the Housotn Alt.NET group is working to put together for the first weekend in May.  The fact that there are so many people that are willing to share their experiences and knowledge with others is great and hopefully I continue to surround myself with these kinds of people.  So bring on the Houston Open Spaces conference.