Songs & Such: “Love Cocoon” by Vigilantes of Love

Before we begin though I would like to mention that all of the Vigilantes of Love & Bill Mallonee albums are available via the Bill Mallonee Mp3 Store. All songs sold in the Mp3 store are DRM free Mp3 files so you can play them on any computer or player that supports the Mp3 format. So be sure to support the artists and purchase the music directly from his website. With DRM-free tracks, you can not go wrong. 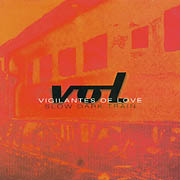 For the first song, we will look at the song “Love Cocoon.” This song is of particular interest because it single handily got the album it was on (Slow Dark Train) banned from Christian bookstores for being “overly sexual.” The funny thing is, it was a love song to his wife. But the Christian sub-culture views sex as something evil rather than something beautiful that happens between a husband and wife. Bill Mallonee himself described the song as a “…a biblical Song of Solomon set to a Rolling Stones sort of groove” and it accomplishes that well. The two lyrics of note that really made me fall for the song were, “well the world keeps on banging and they come and go/it’s just a part of their scenery a part of their show/but i’ve got this wedding band wrapped around my finger/honey I’ll be your poet, your gunslinger” and “Some call it freedom/some call it shackles/honey lets get together and build a tabernacle.”

Bill went through great lengths to stress the importance of the marriage side of things in what I consider the third verse of the song by point that others have sex as just something to do, but instead he has a wedding ring and it therefore actually means something. It is important to look at that because while the Christian bookstores were crying “foul” the songwriter was working to talk about the sanctity of marriage when it comes to sex.

Lyrics after the jump.

“Love Cocoon”
by Vigilantes of Love
From the Album: Slow Dark Train